Sogetsu is an art form that attracts the creative mind.  Nature’s offerings are used to design sculptures that breathe and express life.  Herein lies the greatest difference between Ikebana and floral arrangement.  Innovative perspectives and the inclusion of nontraditional materials offer a completely modern approach to Ikebana. 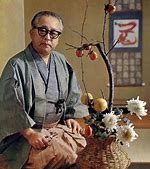 Founded in 1927 by Sofu Teshigahara, the Sogetsu school offered an unconventional approach to ikebana.   In 1930, he participated in writing a “Manifesto of New Ikebana”, a radical document influenced by the avant-garde movement in Europe.  Teshigahara announced that ikebana would, from then on, became one of the contemporary fine arts using all kinds of material in addition to plants. Sofu traveled extensively and made life-long friends with Miro, Dali, Gaudi and Tapies.  Time magazine described him as the “Picasso of Flowers.”

Today, Akane Teshigahara is the fourth Iemoto of the Sogetsu School. Continuing her father’s legacy, she is a powerful installation artist who strives to incorporate Ikebana in all aspects of contemporary life.  She is also a champion of Ikebana with all age groups, increasing the involvement of young people and children in this evolving art form. 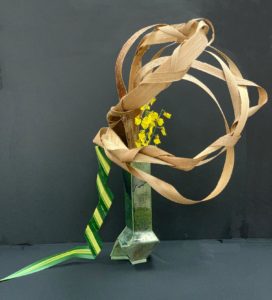 The principles of Sogetsu ikebana include a fresh approach, movement, balance  and harmony.  With those principles in mind, line, color and mass are the elements that combine with individual creativity  to shape stunning and innovative sculptures. 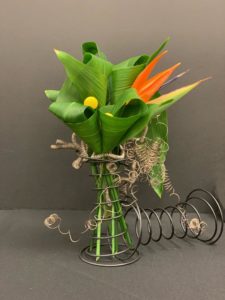 The images on this website are presented for educational and inspirational purposes only.